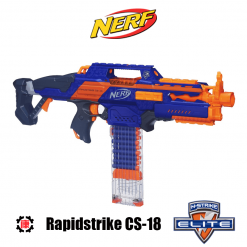 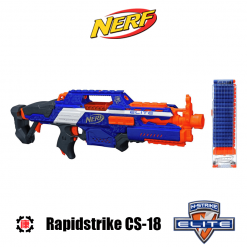 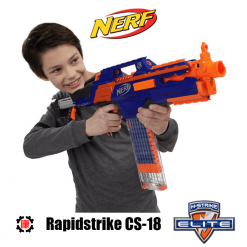 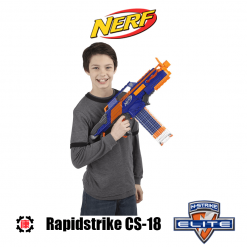 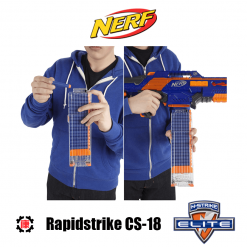 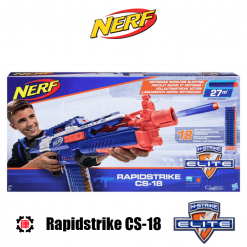 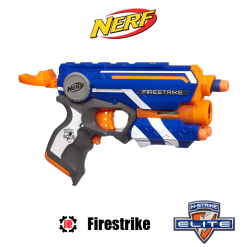 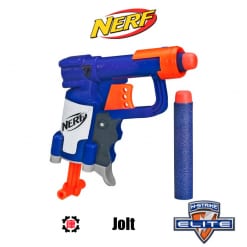 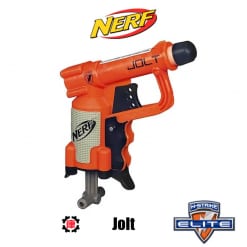 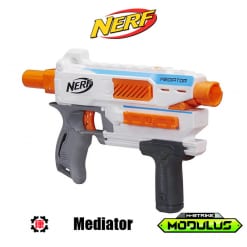 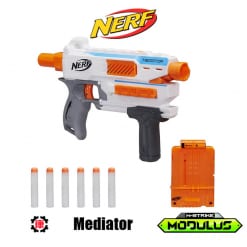 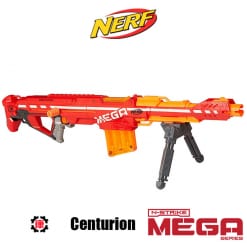 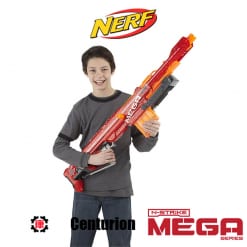 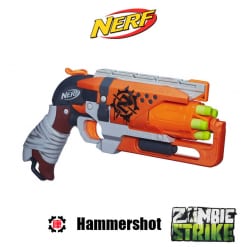 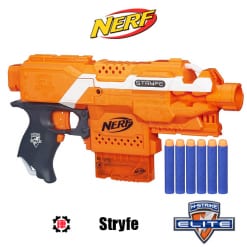 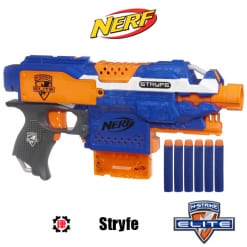 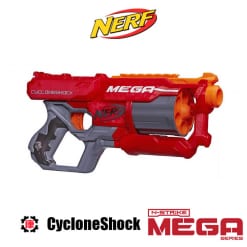 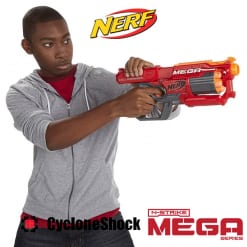 The RapidStrike CS-18 is an automatic blaster. It features five tactical rails: one on the carrying handle, one on top, one underneath, and one on each side of the blaster. It also has an integrated, adjustable shoulder stock, a small flip-up iron sight on top of the barrel, and four strap points: one on the end of the handle, two on the end of the tactical rail, and one above the muzzle. Like other N-Strike Elite blasters, its clip release button is located in front of the firing trigger and its acceleration trigger.

Stay mobile with this streamlined, lightweight Rapidstrike CS-18 blaster! The Rapidstrike CS-18 gives you serious rapid-strike firepower. Spray a blanket of cover fire or go on the move with an all-out blitz! The blaster’s Acceleration Trigger powers up the motor for super-speed firing. The clip holds all 18 of the included Elite Darts, and it’s see-through so you can do instant firepower checks! With a range of up to 75 feet, you’ve got long-range striking power and a lightning rate of fire. Get maximum mission mobility with the Rapidstrike CS-18 blaster!

In May 2013, it was released early in the Philippines due to the release error on the part of the distributor, making it the first country to have it in stores.

It was re-released in 2014 with improved Elite XD internals and a white, blue, grey, and orange color scheme; this re-release was shown off at the 2014 New York Toy Fair.

The RapidStrike is discontinued in Australia.[citation needed]

The RapidStrike CS-18 has been released with the following color schemes:

The RapidStrike is commonly modified to be smaller and “minimized” through the removal of most of the front half of the blaster.

Voltage modification is also popular with the RapidStrike, to increase rate of fire and improve performance.

A value pack named the “RapidStrike CS-18 Rapid Reload Pack” (labeled as a “Double Your Darts and Clips” pack in Europe) contains the RapidStrike CS-18, two clear eighteen dart clips, and thirty-six Elite Darts. This pack is exclusive to Walmart stores in the United States and to Müller stores in Germany.

To reload the RapidStrike CS-18, release the acceleration trigger and remove any loaded clips while holding the clip release. Load up a clip and load it back into the blaster.

Hold down the accelerator trigger and pull the firing trigger briefly to fire one dart, or hold the trigger for automatic firing. It may take a moment for the flywheels to come to full speed; firing before that can reduce the dart range.